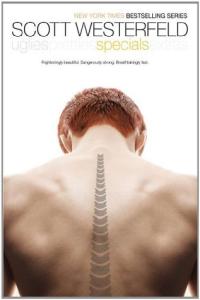 Last book in the series (I don’t see the Extras book as belonging to this series, since it features another character).

I must say, I went for liking Tally in the first book, to thinking she was kinda annoying in the second, to what-the-hell-is-wrong-with-you in this book. And the whole here-we-go-again brain reset thing, got pretty lame. In the second book it was so they could test the cure, and now.. Oh well.

I mean cutting yourself, being a special, all the things she was so afraid of and here in this book she is all of that. And even more. She is much more dangerous than the others.

I am also sad that we didn’t see much more of David or the others. Everything was about Tally, Tally and Tally.

And I don’t know what is wrong with the world. Sex, drinking, doing dangerous stuff while you are just 16 and much more. But all they care about is the enviroment and the war and the rusties. I got a bit tired about it in the second book and in this one even more. Why make people stupid and pretty. Can’t they just be pretty and smart?

Also what bothered me in the first book was that apparently when you reach a certain age you are put in a dorm. Now I am not sure if that goes for the whole population of kids or just a select few. But I mean why remove the kids from their parents? Can’t they just stay with them?

I was happy though that we finally have another city/scenery for this book. Though the books told stories about the other cities, I never thought we would see another city.

I sort of liked the ending, though I am kinda of sad that after 3 books with Tally this is the ending and we will never know what happens to her.