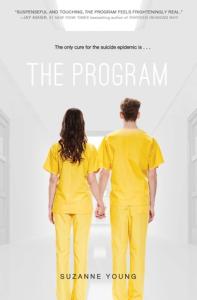 In a world much like our own, but yet so different, there is an influx in teenage suicide, to counter this the Program is created. Suddenly you can’t trust anyone, show one tear or one sad emotion for long, and you will be reported by anyone, your parents, your brother, your loved ones. And then you get send to a facility where they will “”fix”” you. You will come out new, and won’t be sad any more.
But is it really that easy? Is it really that simple?

Well I can’t wait for the second book to come out. I want to know what happens!!

Everyone should read this book. But be prepared for love, pain, suffering and also a few hints of happiness. 🙂 It is a great book, really good characters, good story and a few hints of lovely romance. 🙂