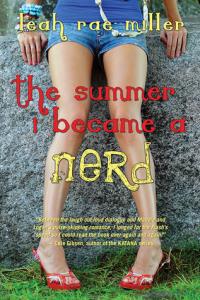 This book is about a girl who is popular, on her inside however.. she is 100% comic fan and all things related. 🙂

The book was really fun, most of the times Maddie was a nice girl, though I specifically liked the parts where she didn’t pretend, where she was just herself. Like when she was with Logan, or when she did Larping. I especially loved the Larping part, my favourite part being where she just owned the Dark Fairy girl. 🙂 Yeah for Logan’s mom, and yeah for Maddie for being awesome at the game.

Also the ending where she tells everyone she likes comics and such, I liked that, she has really grown. From a pretend to be popular/cheerleader girl, to a cheerleader with a geeky side. I am really glad that her best friend was ok with it (though I wouldn’t know why not), and that they made up.

There were however a few things that I don’t like.

The book begins with her telling about her school’s Halloween Festival, she describes the whole thing. That is all ok and it sounds fun, but then we come to the costume contest, and there, is the part which I don’t like.
She presents herself as Spectrum Girl, and she worked really hard on her costume, making a wonderful rainbow-coloured cape. Now you think, the girl will win this, everyone will love it. Wrong. It begins with her teacher introducing her to the audience. The teacher doesn’t announce, no, it sounds more like she is asking a question.
Then Maddie gets up and does some twirls, says what she is. Silence ensues, then a question from the audience, which she happily answers, after that someone calls her a dork, and then everyone laughs. I don’t understand that.. why laugh at her? If someone wanders around in a Batman or Superman or Star Wars thing, everyone finds that ok, but this is strange/dorkish? Seriously what?

Another thing would be her breaking up with her boyfriend through VOICEMAIL!! Who the hell does that? I know you want Logan, I know you want him really bad, but girl, if that boy loves you/wants you, he will wait. If not, he is not right for you.
I was really pissed at her for not even waiting for her boyfriend, talking it over with him. Instead, she just puts in a voicemail (and a few more) and then thinks that it is over. Um no girl, it isn’t. If the other party doesn’t know it, you are not over.
Then she just starts dating Logan, really what?

Other then those things, and Maddie being a bit shallow. It was a good book, I would recommend it if you want a light fluffy read.