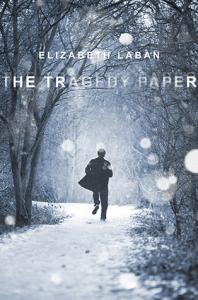 Enter here to be and find a friend.

The first quote we find in the book. And I love it. 🙂

This is the complete review (it might be a bit chaotic though). Enjoy.

We have 2 characters, Duncan (or our main character in the now) and Tim (or our second main character but he is in the past, slowly moving to the now).
Duncan just started with his senior year and is moving to the senior dorms, he is looking forward to it (though also not looking forward to it because of the so called Tragedy Paper that everyone has to write), every year the seniors of that year leave a treasure (be it a pet, rotten pizza or something else) to be found by the new senior that will occupy the room. Duncan soon panics when he finds out he gets the tiny room in the corner, with barely any light. He finds out the room belonged to Tim, a guy who is albino, and a bit strange (if we have to believe Duncan). Something happened between them some time ago. He is also disappointed when the treasure is only a letter and a stack of cds. The letter mentions their past and also the Tragedy Paper. Tim tells Duncan to listen to the cds, it contains information needed for his Tragedy Paper, but of course there are other reasons too.

Duncan starts to listen to them, and gets totally lost in them. 🙂
of course we also see his side of the story. Though it gets a bit confusing, you are hearing/reading about Tim and suddenly it switches back to Duncan.

Currently at the part that Duncan finally makes up to Daisy and he kisses her. And her reply to that is: “”What took you so long?”” That made me laugh, it is such a standard sentence, often used in these situations and it should be cliché by now, but for me it never gets old. 🙂

We are getting closer to the disastrous thing that happened the previous year.
Also I don’t hate Vanessa, but I dislike how she is going between boys, I can understand her reasoning, somehow, but I still think she should be honest with Patrick.
Even now, further in the book, I begin to dislike Vanessa even more, she is leading Tim on, and in the end going back to Patrick. So she is that kind of girl. sighs I dislike those kind of girls.

Wow, that thing that happened. I expected something when I heard the words snow and sledding and trees. And also the fact Tim was slowly going blind (why would you wear glasses or protection?), maybe we worry for what was to come. And also how Duncan was involved and why Duncan was feeling bad about things and feeling guilty. When Tim went to Duncan for the Junior Officer thing, Duncan saw that there was something wrong with Tim, he first thought it might have to do with drinking, but now he knows Tim was just going blind. He kept thinking he should have stopped Tim, but he didn’t. Now he knows that Tim doesn’t blame him or anyone, that it is Tim’s own fault, and that Tim will have to live with the blood on white image as a last image for the rest of his life.

I am very happy that Duncan got Daisy to listen to the last parts, that he finally opened up and showed her why he was evaded everyone and being gloomy. So happy they talked and that Daisy understood Duncan, and is there for him.

In all this book was absolutely, definitely wonderful and beautiful. I would recommend it to everyone. It has some strong characters, wonderful themes and more.

Was this the order or the chaos? – Tim
The sorrows of young Tim. – Duncan
I am thinking the cheddar burger, a coke and the truffle fries. – Tim
That was then and this was now. – Duncan
How am I going to get out of here? – Tim
Sometimes it’s hard – impossible even – to know how much magnitude a choice holds until it is all over. – Tim