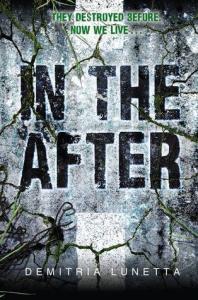 I was looking forward to this book since last year.

The blurb sounded awesome, and well.. let’s just say if I had to rate the 3 parts this book contains it would be the following:

As you can see.. It started awesome, and it ended up in pure boringness.

I loved the beginning, we have our kick-ass main lead girl Amy, who is home alone, but while she is watching tv she sees the news. The horrible news of men-eating aliens. In a matter of days, the whole world is gone, most people are dead. She stick to the house, and only ventures out after a few days. Back then she didn’t know what to expect, but I loved her, how she, regardless of scary men-eating monsters went outside. Ok it utterly failed, but she learned a lesson.

The first part focuses on Amy and later on Baby (the toddler she found), on how they survive, how they try to get by in a world destroyed. Eventually things happen and they have to run away from their safe haven.

In part 2 we get to the New Hope city, a city with survivors, and also a surprise person In part two we also have cursive parts, mentioning Amy as being in a hospital. I found that to be really confusing, I had no clue what was going on any more.

I loved the plot twist that happened in the book though.

I loved the characters, but I had hoped for more of Part 1, more survival, more living with countless scary critters. Instead, I got a bit survival, and after that a whole lot of confusion and boredom.

I am not going to read book 2.