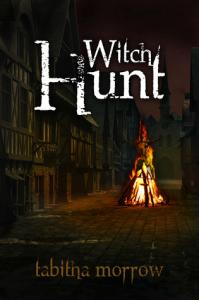 Received an ARC from the publisher at Netgalley.

I wasn’t sure what to think of the blurb, it sounded interesting, and also modern (New Salem part). Now I have read the book, I can only say this: Wow… It was great.

Welcome to the town of New Salem, where lately people have gone missing (exiled?), there are processions, girls and boys live under strict rules. Break the rules, and vanish.

Ruth, was a really nice, good girl. She was sweet, but she was also a teenager, trying her best to fit in, but with all the strict rules it isn’t always going well. She is worried about her friends who have vanished.

One day, after not being able to sleep for a few days, she sees a light outside and follows it, and finds out she, and 2 of her friends are witches!

The story was great. I loved the New Salem town, how everything was ruled with fear and a tight regime, it scared me sometimes, and I was rooting for our girls.

The magic part, was so-so. It seemed to me their powers weren’t that great, it was mostly destructive (though they did try their best). And silver blood? What?

The various plot twists in this book are super-b, though you can guess some of them quite soon, there are hints here and there. Still when you actually find it out, when they get to the part, you are still going to be saying: Wow!

Ethan and Caleb, our two guys (though I must say, I thought Ethan was still a kid, not a guy) who are be playing a big role in the story.

The ending.. well it felt a bit rushed.

Anyways, the book was good. I really liked it and I would give it 4 stars in total.