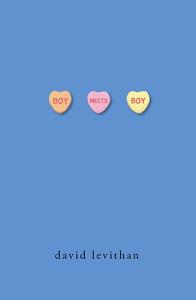 I am trying to read more Lgbt novels. 🙂

And wow, it was a real trip. Though I felt like the book was also quite utopian. Now I hear you say, why? Well because throughout the book, no one minded the gays, no one minded people who dressed as girls (or the other way around), no one minded the lesbians. Sure there were one or 2 instances where the characters were called gay in a bad way. But other than it was quite tame. Like our main character just lived in a place were no one minded it, were apparently being in love with same gender, or dressing up as the other gender were normal. It felt quite strange, but I have to say also a nice change from the normal lgbt books. Which mostly features the angst, the fear to come out, the hate, and even murder/death happening. This book has none. It is just a fluffy read of 2 boys who love each other, but something goes wrong.

All in all, I loved this book, our main character was really fun, but also an idiot at times. Kissing/hugging other dudes while you are in the beginning stage of your relationship and your boyfriend doesn’t know you well hug everyone? Bad idea. Also kissing your ex? Wait what?

But I loved how he tried his best to get back to his love, how he tried so much for him, gave him presents, time and love.

Strange characters, well I would say Darlene, I didn’t know what to think of. She (or he) was awesome, outspoken and did whatever she wanted.
Also I really disliked Joni, she was so nice at the beginning but turned into a major (pardon my french) bitch.

Luckily there are enough good characters, and luckily they aren’t all perfect, but all have their things that go wrong, and that makes the story fun, to see those characters grow or change.

Overall, I would really recommend this to everyone! Read this!