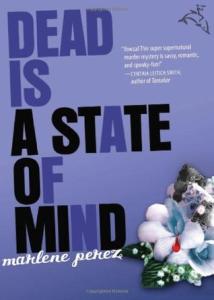 Welcome to book two in the Dead Is, series!

And what a book it was. It clearly wasn’t a case of second-book-in-a-series-syndrome, thank lord. Always afraid to read a second book, I had a few series where the first book was just awesome, but the second book sucked hard, and thus I dropped it.

We got 3 new characters here, Duke and Elise, and Gage. One is a fortune-teller (or so he says), one is and one is . All play a very important role in the book.

Though I have to say, Duke was just beyond annoying, you later find out why, but throughout the book, I wanted to smack his head for confusing and stalking Daisy.

Ryan… well is Ryan. He never really talks about things, and in this book it is no different. He should have trusted Daisy, but instead he doesn’t, making her worry and understandable also making her pissed off. Luckily at the end of the book they make up and have a good chat about things, a really good chat, one that was really needed at half of this book.

And of course, Daisy, awesome Daisy, our super-sleuth in supernatural things, she still hasn’t got a hang of her powers (she still blows up stuff \o/), but she at least tries.

Poppy + Gage, man, that part made me cry. It was just sooo sad, you knew it was coming, but still it killed me to read about it.

All in all, this book has everything. Sleuthing, a murder, wolves, rabbits, stalker fortune tellers and much much more!