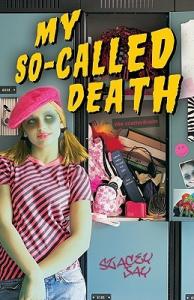 Our main girl was a cheerleader, but during one of the games the pyramid on which she stood was shaken up and she fell down, cracked her head open and voila zombie!

After that there is a whirl of action, but in short, she is a zombie and needs to come to Dead High, a special boarding school for zombies (be them because of natural causes or because they have been brought back against their will). She meets many people, including her lovely roommate who hates her because she is a cheerleader and wears mainly pink. But she also meets a girl named Trish, who is a deprogrammed. She meets a hot hunky zombie boy named Gavin, and well other then that her life at school pretty much sucks. No more cheerleading, the subjects in the school are a bit strange.

Then brains from Deprogrammed starts disappearing… well disappearing they just get harvested out of the girls brains. Poor girls!

Karen decides to go on an investigation! She will find out who did it.

This book was really fun to read, I sometimes felt sorry for Karen, she was so perky and she was so loved in her other school, and now, nobody cares about her, everybody pretty much avoids her and on top of that brains get stolen.

Karen was a really cute, perky character, no matter what the situation she dove onto it and latched herself to the mystery.

The mystery itself was awesome, in particular the last battle that comes at the end of the book.

I loved Gavin and Karen’s relationship and kept cheering for them to get together and be more than just friends. And of course I was hoping for the kiss!