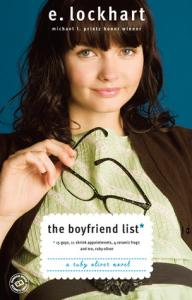 A lot happened in Ruby Oliver’s life, she lost her boyfriend, her best friend, her other friends, and is like she says: A leper.

She now follows therapy and she and her therapist are going through all her male friends (even if they only kissed or only gave presents).

It was an interesting list, but also big.
Ruby didn’t seem like the kind of girl who would be such a man-eater. 🙂 But I was cheering for her during some of the Jackson moments. Man Jackson was just a (pardon my French) dick, a very big one at that. First saying that everything is ok, then dumping your girl, then taking her to a party, then kissing her. Wait what? And why is Ruby ok with the last 2 parts? Well she was kind of hoping he still likes her and all. rolls eyesHe broke up with you!

I liked all the descriptions of the boys, what they meant to her and how she felt during that time. We also get enough crazy mom action (and her mom is pretty crazy), really those parents weren’t exactly helping when Ruby was having an attack. And when she didn’t feel ok, the mom immediately went for anorexic or thinking Ruby was using drugs or something else. WTH? Really weird.

Her best friends… well after what Kim did. :\ That is not best friend behaviour. And her other 2 friends, well I can kinda see why they hate Ruby (she isn’t the smartest one), and the fact that she went out with Jackson and that she kissed him while he was with .

Overall, it was a fun book. 🙂 Recommended to everyone who wants a cute, fluffy book.