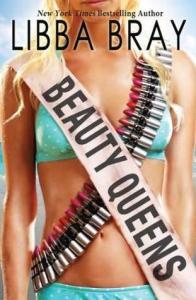 Having this book for about 1 or 2 years, and trying to read the book about 2 or 3 times in that time span, I wasn’t really looking forward to reading it again. But it was for a challenge of one of my groups, so I decided to go for it.

The book is satire, and you can see that pretty much immediately, it takes Reality TV, Sponsorship by corporations, products and things about beauty and mashes that all together to make this book.

There are little side notes, commercial breaks (highly annoying) and tells us about the characters through forms submitted for the pageant.

The book itself, starts of slowly and the characters are quite annoying at the beginning, but soon, about half way, they start to become more awesome, you learn more about them. And yeah, though I wasn’t thinking I would, but I started to love the book.

The characters are awesome, from cute, beautiful girls with only one thing on their mind: beauty, they turn to kick-ass babes who know how to do stuff. They make huts, fishing lines and a lot more!
Also who can say no to a girl when she is carrying a flame-thrower? 🙂

Of course they are not the only ones around. We also got the Corporation wandering about, a cute guy and last but not least: Sexy Pirates… yes you heard me right. Sexy, bodacious pirates. rolls eyes

The pirates, well, let’s just say they brought an interesting thing to the island. And it was fun to see how all the girls went from kick-ass to girly girls who batted their eye-lashes and acted giggly. Such a nice stereotype.

In overall, the book had it’s up and downs. But the ups are more prominent than the downs. The only things I didn’t like were the little notes at the bottom of the page, it would have been better if they were featured at the end of the book, less distraction. Also the whole commercial stuff, some were funny, but most were just lame and not interesting to me.

I would say, read this book, give it a try. If you like satire, and everything from beauty to corporations being trolled/joked about, survival and beauty queens, some Hollywood scenes then you will like this book!

I will also mention that this book is clearly not for tweens/teens. I would recommend this book for 16 or 17+, this due to some slight sexual scenes.

And as an extra some fun quotes:

“You want to know what pain is? Try running out of Advil when you’ve got a Category Five period. I’ve had cramps that would make grown men beg for a bullet between the eyes.””

“Really, being a librarian is a much more dangerous job than you realize.”

“I hate this place,” Tiara whimpered. “It’s super creepy. Like a haunted Chuck E. Cheese’s where the games all want to kill you and you never get your pizza.”