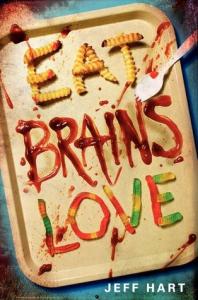 This book is written from 2 POVs. Cass who works at the government and is a psychic teenage girl. Then we have Jake, who is our zombie with a conscience.

I applaud the book for showing another way of zombieness. This time it is like herpes, it is sexually transmittable. I really liked that idea, it is new (at least for me), no more biting people = turning into a zombie. No, no, you have to have sex (without protection it seems).

While I loved Jake, he was a really great guy, trying his best to survive in the crazy world as it is now. Suddenly he turned zombie on his friends and he is now on the run with Amanda another girl who turned zombie on her friends at the same time as Jake. He is trying to make the right decisions, doesn’t want this, doesn’t want to eat people, but has too, because well other means won’t work that well.

I didn’t like Cass, while it gave us an insight in the whole government thing, I also found it boring to read about it and I didn’t really like Cass. And I got tired of the constant nose bleeds. :\
Those chapters that featured Cass were quite a chore to get through.

And let me say this. I HATED the ending. By God, I was hoping for a conclusive ending, let the book be done, but noooo of course not. Well I am not going to be reading the second book. I will probably hunt for reviews and see what they say.