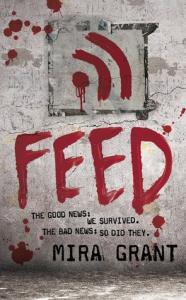 This book was awesome! I was at first a bit worried as to how it would turn out. But now, I want to read the whole series. It was really wonderful, great and also at times sad.

The world is overrun by zombies, but a lot is already reclaimed or still alive. I really liked that, though I would have loved to know how they got there, how they reclaimed the world bit by bit. How they survived.
Since this book is about 26 years after it all happened.

We have a brother and a sister, Shaun and Georgia (yes those names, you can already guess a lot), they blog. One of them is more of the adventurous type, aka an Irwin, while the other is more of the truth seeking person, aka a Newsie. Then we also have their friend Buffy who writes poems and is the technician.

I really loved the characters. And I was heartbroken when

Shaun was just an idiot at times, prodding zombies, going into danger zones and more, but I really like him. And he is a really great brother.

I didn’t think there was much wrong with the book, it was a great story, and I have also bought the second book and waiting for it to arrive.