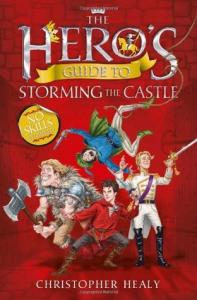 First of all, short review. 🙂

Second of all, that cover! So wrong in so many ways, I have no clue why they even hired that illustrator or that no one told him about the characters. Frederic isn’t blond, he has black hair and he is thin. Liam doesn’t have short hair, his hair is reaching his shoulders and always windswept, also he has green eyes, and is slightly coloured. Gustav doesn’t have curls, his hair is long again and is straight with braids. The only one who slightly seems ok is Duncan. It is a shame, if I had known that before I bought the book (I bought one and two together), I wouldn’t have bought it, but instead ordered the second book online so I could get the right cover.

Now on to the book, this is the second book in the series, and the League of Princes is on their way again. This time to save Liam, but after everything that happens they also have a new mission.

The book was really brilliant, though I felt it was a bit less than the previous book. It just missed something. But it was still funny and it was nice to see all the characters (and also Briar, though she was just a bitch, though you could clearly see she just wants attention and love) again and see them do stupid stuff.

Since the ending was pretty open, I am hoping for a book three!