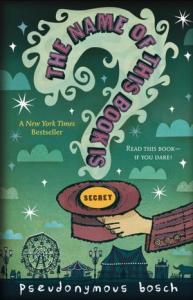 This was a absolutely hilarious book! This book reminds me quite a bit of Lemony Snicket’s – Unfortunate Events and of Trenton Lee Stewart’s – Benedict Society books.

I absolutely loved the creative narration, the little parts that he stopped the story to tell us something, a secret or a warning of just a hint of information.

The 2 main characters: Cass and Max-Ernest take some getting used to. You might, especially in the beginning, find them a bit annoying, but I really liked them at the end of the book. They really grew and learned things and became better characters.

The story itself was brilliant, the villains were true villains. Not the cutesy one you some times see in stories. No real villains with evil plans. I can’t imagine what the secret is, but I am highly curious to what it is!

I just bought book 2 and 3, and hope they are just as much fun, just as interesting and have enough sleuthing as this book has.

Since this book really was great, here are some of my favourite quotes:

Generally speaking, books don’t cause much harm. Except when you read them, that is. Then they cause all kinds of problems.

It was like walking into a treasure trove of books, hoarded by pirate librarians.

Only bad books have good endings.
If a book is any good, it’s ending is always bad – because you don’t want the book to end.

Books can also provoke emotions. And emotions sometimes are even more troublesome than ideas. Emotions have led people to do all sorts of things they later regret-like, oh, throwing a book at someone else.

So I would really recommend this to everyone, be them a child or a parent or just an adult seeking a fun book!