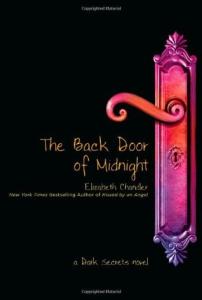 The last book in the Dark Secrets series. A series that was mainly a hit to me, with one exception.

Luckily this story was good. Mysterious murders, psychics and more!

Anna arrives at Wisteria to find out her Uncle died, and her Aunt being totally crazy. She is shocked but determined to find out the truth, especially since she had some dreams. Dreams that continue and even become out of body experiences.

Iris was really scary for most of the book, I also thought she was the one to kill Uncle William. Even though there was enough that said she wasn’t. But since she lapsed out of present, past and future, often mixing them up, you never knew if she was the murder or had committed other crimes.

Anna was really great, I really liked her, how even though her Aunt is crazy and acted weird, she stayed and tried to find out who and what.

The conclusion was quite a surprise, maybe if I re-read this book I would notice, but I can say that until the end I didn’t expect that that person was the criminal mastermind behind it all.

Also the romance, for once, was lovely and I was really pleased at the ending.