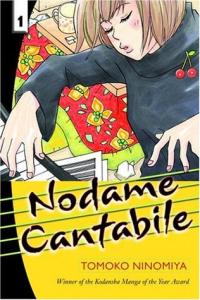 Review for the whole manga. 🙂

I finished this series a week or so ago. And wow what a ride it was. Finally I had a chance to read the whole manga, and not just parts of it. I must say, now that I read the manga, that the anime and jdorama did quite a good job. Most we find in the manga is also found in the anime or jdorama.

The first few manga volumes focus on Nodame and Chiaki, how they met, how they grew together and how they both are struggling with various things that life throws at them. This part was ok, it was hard to get through things at times, especially how Chiaki was acting (all mean and harsh) and how Nodame was acting (overly dramatic, stalkerish and in overall I found her just weird at times). But it also had wonderful things happening. Also the side characters were just awesome, I really loved them and their antics.

The second part of the manga focusses on them being Paris, how both are starting with new things. Nodame with school, Chiaki with conducting. How they both are adapting to life in there. Especially in the case of Nodame, who didn’t have a chance to learn French (I loved the parts that she learned French by watching anime, or that she was using some strange dictionary and almost got Chiaki in trouble). We also meet various other characters, all living in that house. They are all trying to work hard and try their best.
I loved this part especially since it focusses so much on Chiaki and Nodame, and their relationship. Especially Chiaki, he is more and more getting to love Nodame. You noticed it already, but in these parts it is just all the more obvious, that although Nodame is totally nuts and at times annoying, he truly loves her.

Then we get the part where Chiaki decides to move out, and he gets busier and busier. This was the part where I at times cried. Poor Nodame, he never cared to tell her in advance that he was leaving the apartment. I seriously wanted to smack Chiaki for that, how he treated Nodame. I am sure he could have told her, sure she might have snapped and acted weird, but that is a normal response. Someone you love so dearly leaves you.

The ending… well let’s say I was seriously disappointed with it. I expected a lovely ending, where things would finally be finished. Either be a wedding, or a proposal, or something else exciting, instead it ends like how the normal volumes do. With nothing. It is a really disappointment. I went through 23 volumes, cheered and cried, laughed and shouted, and what do I get? A totally crappy ending that doesn’t finish or end anything.
So I am just hoping the mangaka will pick it up again, or at least tries to make a decent ending.

In overall, I would really recommend this series to everyone.