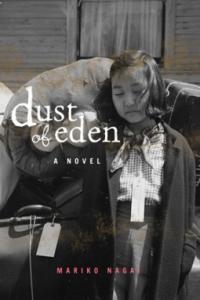 I feel like someone just grabbed a good story, grabbed some scissors and went off to snip at random places and paste them like that. It felt unhinged. Still this book was good, since it also had some normal story telling.

This book is about a dark period in the history of the US. After the bombing on Pearl Harbour there was a time where people were suspicion of Japanese people, started to shun them, call them names, restrict them in their ways, and eventually had them “”evacuated”” to camps, where they had to stay for years.

This is the story of one such Japanese person, a little girl, who doesn’t understand why everything is happening, is doing her best at becoming American. She gets put in a camp, and she tells us about her experiences, she writes letters to her best friend (yes, miraculously not everyone was hating on Japanese people), and later also writes and gets letters from her brother. She also writes to her brother. In between that we get a very stunning look on her life during this period. Camps, with barely anything, classes where they are taught about being an American, and how they eventually after years, were freed and how they got home.

I would truly recommend this book to everyone. Read it!