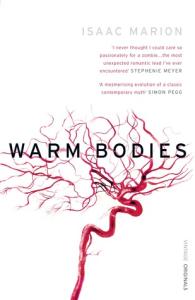 I heard many things about this book, quite a lot of it was good and glorious.

And of course I should mention all the hype that was around this book and its movie.

Now, I have to say, after reading the book, that I can somehow see why everyone would like it. Zombies + capability to think + young, gorgeous living girl + love, it sounds all perfect, but I can tell you, it got quite boring soon.

First of all R, he was a nice zombie (that sounds quite strange, I know), but he was, he thought and his thoughts were all pretty philosophical. He was wondering about his existence, who he was and what he was doing. He can also utter words, unlike what seems most zombies who just grunt and moan. I don’t know for sure, but I couldn’t find anything that indicated why R and M could talk. And I would have loved to know about it.

Juliet, mm she was ok, but also at times an idiot. Going out? While there are zombies and such all around you? Bad idea, girl, bad idea.

And ugh, at the whole Perry parts, at first I liked it, but soon it took quite a big part of the book and I just skimmed/skipped through most of them.

The whole fixing zombies part was interesting, it was new, but I also found it a bit lame and I am still not 100% what the cure was after all that, maybe because I just gave up after that.

I also don’t see in why we would need a second book, this book pretty much finishes most of the things I would want to know, and it ends on a pretty good and final note.

In overall, a decent book, 2 to 3 stars. I would recommend it to those who are seeking a fun zombie book.