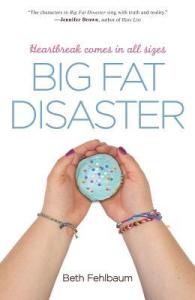 I received this book from Netgalley in exchange for an honest review.
Well where to start. Let’s say this book was a mess. I came for the whole overweight/eating disorder story, but I got a whole lot more than that. Embezzlement, adultery, bullying, family problems, rape, violence, suicide and various other things.

I really had to drag myself through the book. I am sorry to say, but all the other stuff was just too much. I felt like I was watching one of those tv drama/soap opera things, that I only watched a few times and hated. It wasn’t even real any more. I only got confused, since every time we had gone through one thing, POP there was another problem. Dear Lord, I can imagine why Colby just kept eating and eating. Everyone was just bitching about her fatness, but no one actually tried to help her.

The family, the teachers, everyone was seriously messed up in their heads. Not willing to listen to each other, blaming each other for things, even just bluntly ignoring things even when proof is stuffed in their eyeballs. Rape??? Ah I am sure it was the girl’s fault. After all she was drunk and she should have watched out with that. And hey, who says it wasn’t consensual??? rolls eyes Sorry but that just pissed me off. Sure, the girl is stupid for drinking so much, that she is practically unconscious, but that doesn’t mean you can just do what the hell you want with her.

And then we also got Drew. God I wanted to smack that kid. I can imagine, she is a little kid, so much is changing. But come on, that kid never understood anything, was just whining, begging, crying, acting like a spoilt brat.

Then you also have Ryan, aka the sad misunderstood and pissed off teenager who just does everything to make Colby’s life a fricking hell. Seriously bro, maybe you should be angry at the adults and not shove the blame on the kids as well. Luckily it seems he isn’t a total prick since he saves Colby around 2/3 in the book. But still, if he didn’t do all those things, he wouldn’t have needed to save Colby.

In short, I didn’t like the book. I felt it would have been better if it only handed one or two topics, not like 10 or more in one go. So hereby: 1 star out of 5 for this book.