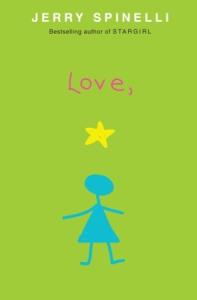 This book was about Stargirl, and how she is doing in her new part of the US.
The whole book is written in a letter form. A big letter just for Leo, though he will never ever get to see the letter.

She talks in the letters about her life in the new state, her new friends, her new projects. Luckily in this book she is less noisy, less annoying. But now we got new characters who kind of take over that role. 2 kids specifically.

Also something that annoyed me that it was really hard to guess ages (just like book 1 had). Stargirl eventually is revealed to be 16, while I mostly felt she was 12 or 14. It was all in the way how she acted and talked to people. Same goes for various other characters, I expected them like 10 or 12 or so, and they turn out to be older. That caused some strange scenes though. Like with the new boy she met, I kept finding it strange that she was interacting like an adult, while the guy felt more like he was a kid. And then we find out they are both of the same age…

I really loved this book though, I especially loved the format. The write a big letter to Leo thing was cute and it was wonderfully done.