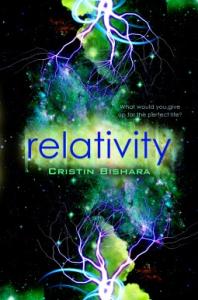 The blurb and the cover were 2 things that pulled me into reading this book, sadly it wasn’t really meant to be.
Why? Well let’s see, Ruby, she was one of the biggest reasons why I didn’t particularly like this book. I felt like I was reading a book about a science computer. Constantly she is sprouting science stuff. Even when she breathes she is sprouting that. :\ Also I found her a bit selfish. When she found out about the parallel worlds, how eager she was at times to just stay there, take the place of that time Ruby.
I also couldn’t determine her age. It was mentioned she was 15 I believe, but at times she acted like 13, at other times she acted like 18.

Also the overload of string theory, science and quantum stuff just went well over my head, at times my head just hurt and I mostly skipped those parts. Really, parallel worlds is fun, but is all that science talk needed? This is the second book I have read the past few months about this topic and both had an overload of science/string theory stuff. No thank you! Can’t we just keep it easy and fun?

And Kandy, God, she was just annoying and a big psycho (attacking people? Stealing stuff? Destroying property and stuff?). I really felt like the writer just had to have a cataclysm and made that Kandy, so that Ruby would run away and explore those parallel worlds.

I did love Ruby’s mom, and also I liked the fact that this time instead of a door or window or mirror, it was a big old tree that was the portal to the other worlds. Really interesting and also explained the stories that were told about people trying to cut it down and who died or got hurt because of that.

In overall, I expected better. Let’s hope that one day I will find a parallel world book without all the science and stuff.