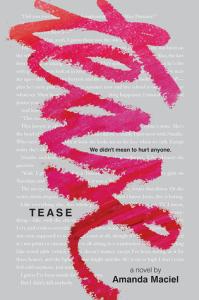 I was really interested in reading this book. (though it sounded quite a lot like I swear by Lane Davis)
Luckily it turned out to be different. The books switches back to now and then (when everything happened).

Emma committed suicide after months of bullying. I have to say, maybe it is harsh, and maybe unfair, but I can kind of see why girls would hate and bully Emma. Throughout the whole book she is with one guy or another and is really making rounds through the popular guys. She even steals a guy right under the nose of his girlfriend. I mean, sorry, but what? So yeah, while it is sad she committed suicide, I think both parties (bully and victim) are both wrong.

Though I must say I practically hated and wanted to strangle most of the characters. Brielle was just (sorry for my language) a bitch, Sara was just oblivious and annoying and then you had Emma, who just apparently thought stealing guys is totally ok, and last you also had Dylan. Who acted like he never did anything wrong in his life, while he was the one who did many things wrong.

The book was interesting though, it is a sensitive subject and I can imagine might be hard to read about. But I felt that the writer did a good thing with the topic. The court stuff, lawyer stuff was really interesting, and believe it or not, but by the end I actually liked Sara a little bit.

Still I would recommend this book to those who like Realistic YA fiction.