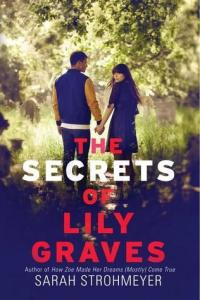 First of all, I have to get this off my chest. OMG this book is just pure awesomeness! The twists, the little details, everything was perfect!
It all starts with a fight between Lily and her frenemy Erin, and ends in Erin’s suicide, or was it suicide??
Suddenly everyone has a motive and everyone is being checked out by the police.

I loved, loved Lily, she was a really great character. I really like the fact that she comes from a family of morticians, that gave the story a little more edge. I am sure I wouldn’t have loved the book if Lily was a cheerleader or something else equally boring. And I loved how she dressed, in black lace, like Morticia Addams. Truly kudos to that! She never gave up, even though a lot of things turned against her. She was however at times quite naive, never once noticing that those tutor lessons were just an excuse for something else.

I also really liked Matt and Sara, and how well those characters were crafted. Matt the jock, who was the boyfriend of Erin… well until he found out certain things. I didn’t however like that he was flirting with Lily while he was still in relationship with Erin. I found that a bit tacky.

Sara, ah Sara, the best friend and so much more. She loved to watch Crime Investigation shows and helps Lily with a lot of things regarding the whole Erin business.

And then we have the wonderful, super awesome ending! I was totally correct on who was the killer and who helped the killer, that made me cheer a bit. Though it still stunned me that I was actually right, I kept hoping that it wouldn’t be true, since it would be quite a shock to various characters in the book.

In short, the book was just epic, awesome and a real recommendation to everyone who likes these kind of novels.