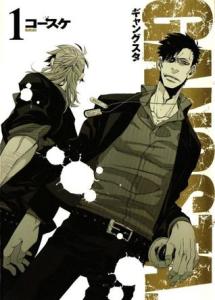 Warning, this manga is NOT for anyone under 18. It contains: Sex, naked women, gigolos, prostitutes, violence, people getting killed and various other things.

Now on to the reason why I picked this one up. I heard it was getting an official release in English, and I wanted to know if it was worth buying it.

The two main characters, two guys are totally kick-ass and I can say this you wouldn’t want to find them in a dark alley. Though it seems they aren’t that bad (they do some things in the manga that is actually quite nice). And later we get a third character, a girl named Alex, who used to belong to some very shady figures, even having to be a prostitute. I won’t tell you how she gets in the story, you will find that out.
We slowly find out about the past of our two main males, but also see how Alex adepts to life without prostituting herself and getting her ass kicked, a life of semi-honesty. I really liked that was added. I was already worried we would just get action and action, but we also get life stories and drama.

Also a plus thing, that you don’t see often, a deaf main character. That made the story more interesting. Especially for Alex who can’t really do much with sign language, will have to learn it if she wants to communicate with that guy. I can’t wait to see how that will go.

The art style reminded me a bit of Saraiya Goyou and Baccano. I really liked it, you also know right away this won’t be a bubbly and cute manga, the lines and the whole art is quite dark and sharp, but still very pretty to look at.

The stories (each chapter has a different tale to tale) are great and really interesting.

Will I be buying the official release? Yes, I will be sure to buy it and follow it.
Thanks Viz Manga for licensing this manga.