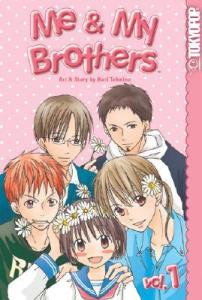 I was looking forward to the manga, the blurb sounded quite awesome.

Sadly, it was not meant to be. The whole book is one big cliché. Suddenly she gets 4 brothers, who all look like they stepped out of some other manga. We got Takeshi, who clearly looks like Mori (though now with added beard) from Ouran High School Host Club (same way they act, practically the same look), Masashi, a bit of a combination of Tamaki and some other characters. Takashi, clearly Kyoya, only a bit more kinder, and then our dere-dere Tsuyoshi, who is like the Hikaru and Kaoru combined with a bit more dere-dere added.
I didn’t like them. They babied the poor girl, just stepped in her life without warning or care for her. And they totally made her embarrassed by going to school like that (especially Masashi was annoying to do this).

So nope, I am not going to continue this. The brothers might have been fun if the girl was like 5 or 6 years old, but it just is awkward when she is 14/15 and they treat her like she is 5.