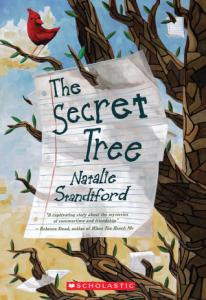 In a small neighbourhood are various mysteries, from a Man-bat to a Witch House.

And now added to that, is a Secret Tree. What is a Secret Tree? Well a tree where you can put in your secret and it will be eaten by a ghost, well that is the story that is being told.

Minty was a wonderful character, I really liked her, though I also felt sad for her. Growing up is no fun. Her best friend Paz leaves her for another friend (who for most book was a total (sorry for the language) bitch). Luckily Minty finds another friend, named Raymond.

Raymond was an interesting character, I quite soon knew what was wrong though, and also why he was living in that model house and not with his mom. And who his mom really is. 🙂

I loved Raymond and Minty together, solving the secrets and pasting them in a big book under pictures of those people. 🙂 And of course spying at evening and being mistaken for a prowler. Lol.

I didn’t like Thea or Melina though. At times they were ok, but most of the time Thea was just whiny. Maybe if she was just a bit nicer Minty wouldn’t do the things she does.

The secrets were fun and interesting. Some were sad, some were happy. Most were really big secrets that you wouldn’t want anyone finding out about.

I really loved this book. It is all about growing up, last summer before a bigger school, finding new friends and finding yourself.

I would write more, but I don’t want to say more, find it out yourself by reading this book.