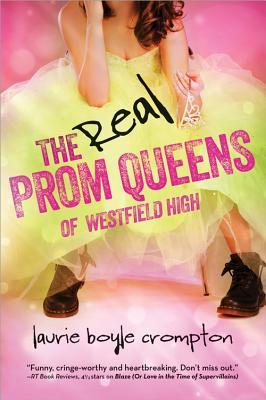 Oh my, this was a hilarious fun book!

It all starts when Shannon, Kelly and Amy get called to the office, there they find out they are the ones to be voted least likely for prom queen. And then they are thrown into a reality show, all about that, and to make them prom queen material.

I really loved Shannon, Kelly and Amy, well ok, at least in the beginning. Even after everything, Kelly and Amy stick mostly to being true to who they are, even when they are all primped up and even after all the lessons they got. Shannon however, quickly turns into a total bitch, dates the wrong guy (and makes the other break his heart), dumps her friends, says mean things and more. Luckily insert cheer she finds it out, and starts to change and start to rebel. And my, that part was so much fun.

I really hated the Noralique stuff, they were too controlling and while I can imagine that you want to know everything so that you have material, there is a line. What they did to Shannon, Kelly and Amy was just bad, same goes for various other things (which I won’t mention, because, well spoiler.)

I am not one who is big on reality shows. I like reading about them, but I am not the one who squeals when they are on tv. Actually… I barely watch tv. 🙂 So a lot of references just went over my head.

The ending of this book, was just in one word: Epic! I won’t spoil anything, or say anything, you will just have to read the book.

I would really recommend this book to everyone. It is a fun short book with romance, reality shows and more!