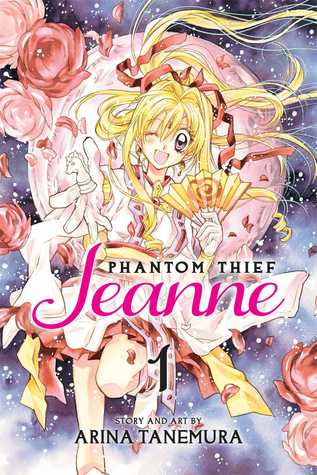 I love Arina Tanemura’s works, I have read most of her works (as far as I could find them here), but Jeanne I could never find. Luckily Viz decided to re-release them in a new format, which meant I could read them!

I loved Maron/Jeanne, she is a great character, both in her magical form as in her human form. Though I wish her human form was a bit more honest with things or would speak up when something isn’t fun or good.
I loved her clothes for when she was in Jeanne mode, they are really pretty, would love to cosplay as Jeanne, that would be amazing.

Sinbad/Chiaki however, well it took some time to like him. He was too forceful, a bit too mean, especially in the beginning. I really dislike him for how he acted towards Maron. Luckily at the end he starts to warm up and we see a different side of him. Still I worry for the later volumes.

Most things are soon explained, why Jeanne has to “steal” the paintings, why Sinbad/Chiaki is doing it too, and who he is working for. Still there are some explanations needed, how did the two angels find the reincarnations of Sinbad and Jeanne, what were the reactions of the kids when they found out? Well I hope those will get answered in the coming volumes (is excited!).

I also think Jeanne/Maron was a bit oblivious, I mean come on, I know Sinbad was wearing a mask, but he doesn’t look that much different from Chiaki and I would say with the time she spends with the guy that she should know who it is. Oh well, the magical wonders of manga/anime. 🙂

All in all, I would recommend this manga to everyone. And I will be waiting for the next volume to come out!