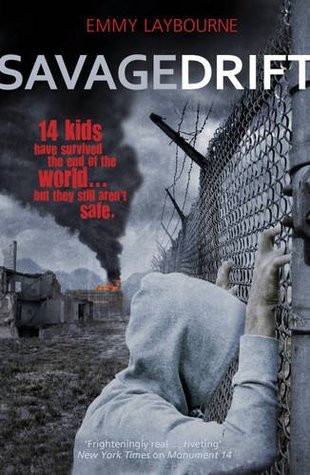 The last, final book in this series (noooooeees). And what a perfect ending it was (but sad).

This time we have once again Dean as main character, and as a second main character we have Josie (who at the last book was presumed dead/gone).They are both in various camps, Dean and all the other kids made it to a safe heaven (is it though?) and Josie is in some kind of O camp which has a lot of similarities to a concentration camp. The first part is mostly about the camps and making plans to find Josie. While the Josie part is mostly about how she got there, how she is trying to survive. Then it goes to roadtrip (and fleeing) to find Josie.The book was at times pretty gruesome, especially the parts about Josie. Poor, Poor Josie. Sure she is dangerous and so are the other O’s, but to put them in such a camp, under such conditions. It was horrible. I cannot imagine how such a camp was ever approved and why there isn’t stricter moderation. The people were practically starved, abused and violence and other bad things were order of the day. It was practically a concentration camp. The other camp wasn’t much better, doing the same as what happened during WW II, kidnapping or taking pregnant woman to test them and their babies. Horrific.The drifts were pretty scary, and I felt sorry for those who didn’t know what was coming. Once again the government tried to cover something up, if only they had just told everyone they made a mistake and that people should watch out, especially O’s and the ones who just burn up. I am sure more people would have been saved that way, and not have to go through these horrible things. I didn’t like the part were they found that baby in their stolen car though, I felt it was a bit unnecessary/unneeded. While it provided that they had a chance at a home/safety, I still felt it was out of place. Especially since they already had enough trouble with things, it really broke up their group. Niko went his way to find Josie. Jake, Dean and Astrid stayed together for a bit longer.On the topic of Astrid, I found her character at times annoying and also indecisive. I wish she had picked sooner between Dean and Jake. This would have saved Dean sadness and pain and confusion, and I am sure it would have helped Jake as well. I didn’t like how she bitched at Dean, while what he was doing was pretty much normal. He was just worried about her, or he felt frustrated at Jake. What is he supposed to do? Ignore you? Leave you? Say nothing and just keep it inside? Still I loved how Dean stayed with Astrid no matter what, he was truly wonderful, only faltering a few times, but mostly stuck to her side.Niko and Josie <3 I loved that little scene in the hospital, so wonderful, beautiful and fitting. So happy for them.The ending, wow, just wow. It was just what I had imagined, and even more. I truly loved it and it was perfect. 🙂 I do wish a tiny little bit that we will get a side story with Jake, to see what happened to him, did he reach home? Did he get their messages?I would truly recommend this wonderful series to everyone!