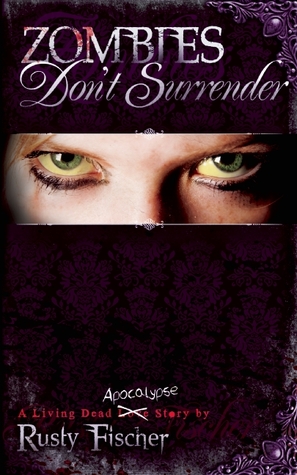 I was totally looking forward to this book, sadly, it was just not meant to be. Especially not with the ending. My God, that ending.

This is also the first book in this series that I didn’t rate a 5 stars. I just felt like it lacked, especially with the anti-climatic fight, that should have been way better and the lack-luster and especially cop-out ending.

Most of the book was good, but around 3/4 of the book I started noticing that we probably won’t get a good ending, there was just too much still going on that needed to be wrapped up and soon. The whole battle against the most evil of zombies (aka as Val) turned out to be utterly anti-climatic and boring. I just expected more of a arch nemesis as big as Val. I expected an epic battle between two zombies. Instead I got a pretty lame-ass battle/confrontation. And then the ending… Oh, I am still shaking my head at that one. So sad that instead of conclusive Mr. Fischer left it wide open, nothing conclusive. I won’t spoil much, maybe other people will love the ending, but I didn’t.

I did love the characters, and seeing them again. Poor Stamp, while better, he still is not the old Stamp I really used to like. He can barely do anything, needs help with a lot, and can’t understand basic stuff. He is like a kid/baby.

I did love Maddie, and how she did her best to live and find a place for her and Stamp when they were Vanished. I loved how she tried her best, but I also hated her for her attitude/decisions, she could have saved that girl, but decided to watch. :\ I just felt sick when I read about that part.

And Val, urgh, Val. Really girl drop the whole revenge thing, it just gets old that you have to go after Maddie every time and destroy everything in your path.

Well all in all it was a good series, just a shame it had to end like this. I do hope Mr. Fischer will make a new zombie series though, and hopefully that one will have a good ending. 🙂