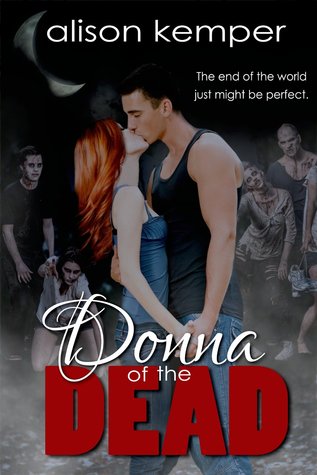 I wasn’t at first sure what to think of this one, the reviews weren’t on one line. One side said it was bad, the other said it was awesome. 🙂

My opinion? This book is fun, but I agree with quite a few points in the “we think it is bad” reviews. That is why I am also seeing this as a snack book. Fun and fast to read, perfect for when you just need to take a break and want something simple.There were good things, but there were also bad things.For instance, there are zombies, what do you do? If we have to believe Donna, zombies aren’t really her top-priority. Throughout the book her priorities are like this:1. Liam2. Liam3. Liam4. OMG Liam’s ass/chest (insert other body parts)5. Deke (why is he acting like such an ass?)6. Food/Drink7. Her Best Friend8. Oh Yes, Zombies! Also very important.Donna was enormously silly and hilarious, and at times also annoying. She was also a total ass to quite a few people. I especially disliked her attitude in regards of Deke. She treated him like a pile of poo a lot of times. And sure, he does too, but that will be said later. I also found her voices to be fairly useless. Run away? Watch out? (and not say anything more), ah duh, of course you should run or watch out when you have a city, no correction, a whole damn world filled with zombies. I had expected something better, and most of the times Donna even ignored her voices, trying to wave them away, with big consequences at times. And a lot of times the voices wouldn’t even say anything, which caused enough troubles as well. Donna is also a big wuss. I can somehow imagine why, and I am sure I might even do the same. I am sure everyone in this glorious world will be all like: “Me? I would act, I would bash zombies to death!”, but I am sure once it actually happens, you will do the same thing as Donna, hide in a janitor closet or some other place, even if you know that won’t last for a minute once zombies get close to that closet or hiding spot. She also wasn’t really the smartest, at least that is the feeling I had throughout the book.Deke, ah, Deke. A fun character, but I cannot for life and all that fathom why he keeps being with Donna. Sure, we all (quite soon that is) know he has a big crush on her, is jealous of Liam and all that, but she is an enormous ass about a lot of things. Now, of course, he isn’t all that nice either. He makes pretty of remarks as well. I really disliked his mostly jealous attitude throughout the book, especially since he should know how Donna is. How clueless she is about it.I did like him and how he just bashed zombies to death, how he protected people and how he did everything he could to get through the zombie apocalypse. Liam and also Saul. First Liam. I already had my suspicions about him, especially after certain events happened. There were just too many coincidences happening. I won’t say anything else, just read this.Saul Shivers Scary guy, and also disturbing how smart he was. I mean, zombies are already bloody scary and dangerous, and now we have some sort of half-zombie who can think and organize. So nobody would be safe as long as he and of course other half-zombies are alive. Since they can just sabotage stuff and make sure the humans will lose. I did like that touch to the book, it made the book quite a bit better.Now, the first part takes place on a cruise ship. The second takes place in a high school, with its typical clichés added. Cliques? Yep! Bitchy girl who acts like she is boss? Check! Cheerleaders? Check! Geeky people? Check! And so it continues. It was just laughable how many things happened that were cliché. I did like the ending (bookmobiles \o/) and I loved the librarian. I would have to say, of all the characters, she was the best and the most awesome. Zombies? F this all, just use pepperspray, arrows and all that!The ending itself was great and I really enjoyed that it ended like that. However, I would have loved a epilogue. I would love to know if there was a cure in the end, what happened with Deke and the group. Did they truly survive?All in all a fun, hilarious book. If you need a quick snack in-between your books, be sure to check this one out. 🙂