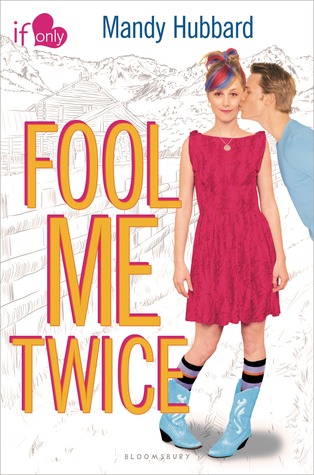 I just adored Mackenzie (well for most of the book, she is a bit over the top at times, not just character but also with clothes/hair and other things), she is a cute and wonderful character.

I felt for her when we found out about Landon and her being dumped because he cared more for his ex. (stupid guy rolls eyes). However, while the book was fun, I had hoped she was more honest sooner. Instead of pretending to be his girlfriend the whole time, I just wish she would have told him, and sure he might have gotten angry, but now I was just waiting for the inevitable to happen and when it happened it was a bit anticlimactic, especially considering what happened.She is a strong character and I love how dedicated she is to things (though if we have to believe everything, she might be a bit over dedicated (painting your hair in blue/red, too much, just too much).I did love how she thought up the pranks (her pranks were, at times a bit painful, but also hilarious fun). And I loved how a prank war ensued between Mackenzie/Bailey and Landon. How they each tried to do better than the other. (which ended in hilarious situations)I disliked Landon in the beginning. He was a total asshole and I just wanted to smack him. Using Mackenzie like that, just no. Luckily he changes (yeah for hits to the head) and he becomes more sweet and nice. I really loved that Landon. Bailey, ah my favourite side-character. I loved her, she was a fantastic person and I loved how she was there for Mackenzie and tried to help her. I do hope these two will stay friends even when they are away from each other. crosses fingersAll in all a fun, interesting book and I would certainly recommend it. A nice summer read. But I will have to warn people, you will have to push yourself at times. I also had a few parts where I just wanted to close the book, but I continued, and dang I am happy I did.