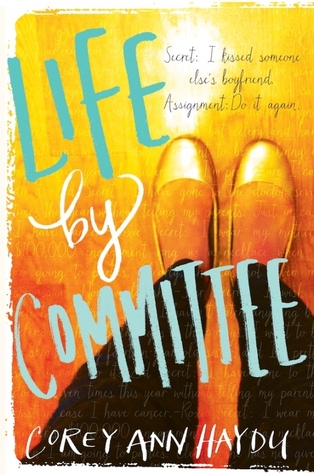 Sorry, but I hated Tabitha, for most of the book I just wanted to smack her for kissing a guy (no matter how sleazy he is) who has a girlfriend and even going to his home and even doing all the things she did.

Elise, I don’t know, I didn’t particularly like her. I also feel that is more because we get in the middle of some story and she also has another friend that gets more attention (at least it seems like that), you never know if Tabitha was her first and best friend, or that that friend was the first one. We also don’t know exactly why Elise is acting like this, why she picks Tabitha at times, but other times the other person and doesn’t chat much with Tabitha then. It was all a bit weird.

Joe, ugh, most hated character of all the book. It doesn’t help that nobody ever goes against him, and he can just screw girls around without consequences. I truly hated him, and I felt sorry for Sasha (even though I also didn’t like her).

And yes, I practically disliked… well all the characters. There were just so many characters and so many faults that they had, it just didn’t feel good. Paul was just not really a father-character, Jemma was a bitch and so on. :\ The only one that was somehow interesting was Devon and sadly he didn’t get much showtime, only when he was needed for the story (urgh, hate it when that happens).

We also have the part that Tabitha is dumped by her friends (we get reasons, but who knows if they are truly the reasons, we see only Tabitha’s point of view about it), I felt it would have been better if we had seen Tabitha lose those friends, see her before all went down to hell. Now it feels (like I said earlier) like we just stepped in a story that already begun. You know, like when you get to a movie too late and missed all the beginning things that explains everything. That is how I felt.  And that was not the only thing. I also didn’t get what the whole fuss with Tabitha was about, seriously, someone is NOT a slut or a whore or whatever just because she starts to wear make-up and wears different (and more adult) clothes or when her boobs grow (not much she can do about that, now, can she?).  I think everyone was just overreacting. Especially the part with the whole guidance counsellor and how Tabitha was chewed out because she wore a beige dress which was a bit short, but (big BUT) she wore tights and also flats. I mean, it might be a bit different if, say, she wore nothing under the dress, but she wore tights. What is this town, what is this school that girls get chewed out because a few short things (with decent stuff under it). I also disliked the counsellor, she didn’t, not once, listen to Tabitha.

I did like the whole committee thing, though I feel the assignments were over the top at times (especially those of Tabitha). I am sure they are meant to do something, but sorry, quite a few of those are just bad things. Like pushing Tabitha to Joe, or like the assignment were she had to get high with her dad. Like wait? What? NO.

And the whole twist at the end? With Sasha? Loved it. It was a nice twist and it fitted with the story, it was quite predictable there would be a twist, but I didn’t imagine it to be this. Nice. 🙂

The whole books and notes in them were fun, however I am very much against doodling or writing in books, so I was also cringing at times. If you want to write something about a book, or add a note, please use post-its or something else. Poor books. 🙁

There were also a few spelling/grammar errors or sentences which didn’t sound/read right which is a shame. For example this sentence: “Cate’s no dummy – he knows I’ve called in backup.” Cate is a she, she is the mother of Tabitha.

The ending, was awesome, but it was too late by then. I was happy for Tabitha, happy for Sasha, but I still didn’t like them.

All in all, a book I wouldn’t recommend.