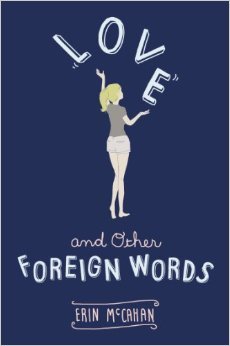 This book was wonderful, it is about a girl who can speak various languages, High School, Friends, Break-ups and more, but all she wants is to speak in her Native Language. And she also wants to know the language of love.

I really liked Josie, though I felt like she was a bit obnoxious at times with how smart she was. I also felt like she was making fun of people and how they speak. Don’t get me wrong, I liked the idea of various languages, but I felt that when she had to translate she had to dumb down and go to their level. And that was a shame. I also didn’t like how she behaved towards the boyfriend/fiancé of her sister (though, granted, he behaved like a total ass at times and was in many ways quite similar to her (though of course she doesn’t think so)). I loved her relationship with her dad (they were great together). I was however sad with the ending and whom she ended with. I had hoped someone else, though the hints were strewn through the book (even at the beginning), but one can hope for a change. 🙂 But for most part I was cheering for Josie. Hoping she would find someone to love. I seriously disliked, no hated, the sister. My God. She was making mean remarks towards her little sister. Nothing seems to be good for her. I felt sorry for Josie, and also found it strange that the parents barely did anything against this. I also didn’t like how Kate changed, at the beginning I kind of liked her, but that was soon over. She was a total bitch, and I didn’t like how she treated her sister like a baby. Even discussing things Josie talked to with her sister with her fiancé and also with other family members. I mean, what? Why are you discussing it with him? Why are you acting like you are a parent? Why are you doing all that? But she got what she deserved (at the wedding), so I am happy.All in all a fun book, and I would really recommend it.