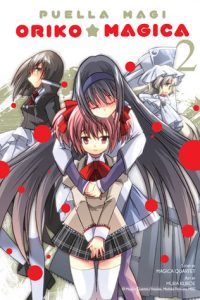 I would like to warn people first, there is quite a bit of gore (Ripped off body parts/half eaten people etc.) in this one. I didn’t expect it, so to everyone else, be warned.

Now to the review. I bought this manga at the Animecon I went to this weekend. I already had 2 other series by Magica Quartet and I was looking to complete my collection.

However, this manga is quite a bit different from the others I read. For one the art style is at times atrocious and ugly. At other times it looks quite nice. However at most times I was shaking my head and looking at faces that were distorted, various other things that looked quite wrong and so on. It is a real shame, and I wish it was better.

Luckily the story is good, though there is more than one plot-line going around. We have Kyouko’s storyline, Mami’s storyline, Homura’s storyline. They all have one common enemy, Oriko and her friend.

This manga also made me hate Kyuubey even more. My God, in the anime he was already urgh, in various manga urgh, and in this one he is even scarier (probably because of the art style).

The ending was unexpected, and also a bit weird. Weird as in, why stop there? Why make that your ending? Especially knowing there is no third volume, I was also disappointed.

But I would still recommend this manga, even though it has some flaws. Like I said, the story is great, and it is nice to see old and also new characters.