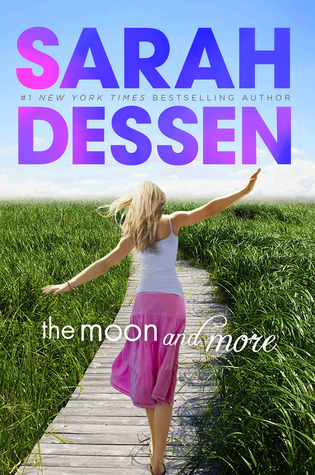 My first Sarah Dessen book, and while I liked it mostly, there were enough parts that I didn’t like.

Bad parts:
1. She breaks up with her boyfriend and immediately gets kissed/gets in a relationship with a new guy. Hold on what? Did you even love your boyfriend? Since I don’t know, but if my boyfriend of 5 years would break up, I would be heartbroken, sad, depressed. I wouldn’t just kiss/get in a relationship with anyone immediately. That takes time and that time is not an hour.
2. I also got a bit confused about her dad/father thing. It was nicely added, but I think Stepdad and just dad would have been enough. Now at times I had to think which father/dad we were talking about now.
3. The predictable story. From the get go I had my suspicions about her relationship, about the whole town, about the whole story actually. And again I don’t like predictable stories, I like stories that twist and turn around corners, wind around roads, go up and down, don’t care about being straight. Sadly this book is quite straight and that is also why I deduced a star.
4. The characters. They were bland. Theo and Luke especially. They had their little roles, and little faults and it was up to Emaline to find them and act accordingly.
5. The whole everyone just bunks in her room thing. I can imagine the fumes/the whole house building is a bit annoying, but come on, it is a bit rude to just go into someone their room when they are not there. And especially if that person has asked you kindly to not go in there. I can imagine that sisters don’t care about that, but the mom? Seriously? Just get out of the room, go outside, go somewhere else, don’t just barge into your kids room and read her magazines/eat food on her bed etc.
6. The whole Clyde thing, it was interesting, but I really hated how both Theo and Ivy just pushed and pushed until Clyde finally just talked with them.
7. I disliked the older sister. She was just too bossy and too annoying. Thinking she was the boss/God of that business.

Now for the few things I liked (sorry there aren’t a lot).

Well as you can see, there are more bad things than good things, and that is also the reason why this is a 2 star, and not higher.

I will be seeing if I can find some more Sarah Dessen books, and I do hope they will be better. And if not, I guess she will go on my list of authors I don’t want to to read. Which would be sad. 🙁