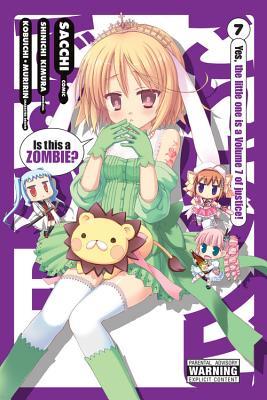 Wow, this was an awesome volume, and you can really see that we are nearing the ending for the manga.

Various things are getting solved, problems are being talked over. I am happy with this development but also sad, since I love this manga and don’t want it to stop. 🙁

The amount of ecchi is nothing new, though it still amazes me that it is added, it has no use other than to give fanservice to the guys who read it.

The art is still nice, though it changed a bit over the years. Ayumu looks slightly different and at times I had a hard time to recognize him. Still he is the best character even though he is a big pervert. But oh well, who can resist a zombie masou shoujo that instead of a girl is a guy.
The other characters are also wonderful and fun to see, and I will be missing them when this manga will stop. They each have their quirks and characteristics and they truly make the story.

Like with other volumes this manga consists of drama, comedy and action. It is all well balanced and mostly the action is ended with some sort of comedy.

All in all a wonderful volume, and I will keep the last volume for a bit, I don’t want this series to end just yet. I will be hoping that the light novel will find its way out of Japan and be translated. hopes and crosses fingers