I normally don’t read classics (too boring), but I love manga, so I just had to try this one out. Thanks Netgalley for giving me this book in exchange for a review. 🙂 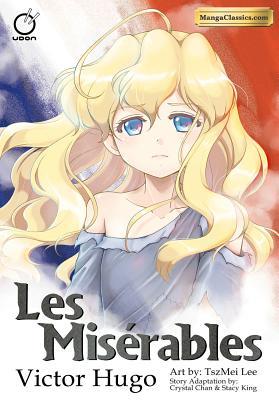 Let’s just say one thing, it was still boring (story wise). I know I will never read the original.
I love the fact they made a manga out of this one, I can say it improves it by a lot. Instead of boring descriptions about characters or parts of the story, you can now see them, see them grow up, see how they look and see the story unfold.

Cosette was a wonderful character. Poor girl, having to go through so much in her youth, I think she deserved the happiness she gets in the end. It was really fun to see her grow up. From little happy girl, to unhappy and back to a very happy teenager.

Jean Valjean was an interesting character, but I felt sorry for him. Being so hunted, always having to watch out. It was also a part that annoyed me. Come on people, don’t you guys have something better to do then to hunt some “criminal”? I mean seriously, I am sure there are bigger criminals or bigger crimes to solve or fix. It came over also as unbelievable.

Marius was a really fun character, though his love made him blind, and he was very rude to that other girl. I wish he could at least have seen it and just said something or done something.

All in all, a really interesting adaptation of a novel. Yeah for manga!
And I will be sure to check the other Manga Classics.