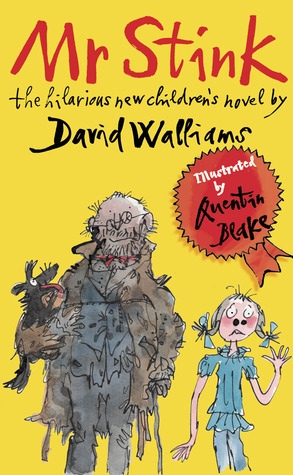 (Note: I read this book in Dutch, but will write a review in English. So the names I am using are from the Dutch edition.)

For some reason I just can’t enjoy David Walliams books, I have tried several, and all ended up being dropped or rated 1 or 2 stars.

I guess that mostly lies in the part that his books are a bit unbelievable/strange/exaggerated. I do love the illustrations though and that is also a big reason why I do keep trying out his books. I love Quentin Blake and his illustrations.

This book again, it started of quite nicely, and I was very interested, but as soon as we got to the whole living-in-a-shed-thing it started getting annoying. Mr. Stink was just being bossy and annoying. Demanding food, demanding night stories, demanding all kinds of things. And that took away his charm. I really liked that he was a homeless guy with a past, but now he was just a demanding overlord.

His past thing? Nothing I wasn’t expecting. He wasn’t acting like a homeless dude that much and he had lots of things that seemed off. Like for example his manners, the dishes and cutlery and so on.

There is one character that I adored, and that was Chloe. She is a really great character and she was so sweet. Even though at times she thought Mr. Stink stank, she kept it in unlike so many other characters. I felt sad for Chloe, for having such a mom (more on Mom Kruimel soon) and such a sister. I am glad she at least found a friend in her dad.

Mom Kruimel, and also Annabelle were quite annoying throughout the book. I absolutely disliked the mom. The things she wanted to do for her politician’s career were just ridiculous. I can’t see why people would want that.
Annabelle, well I can say I am glad for the change that happened at the end. She could use some kindness. She was just plain rude and acting like the perfect little daughter.

All in all, it was quite a fun book, but sadly the exaggeration, the homeless dude’s attitude and several other things annoyed me.