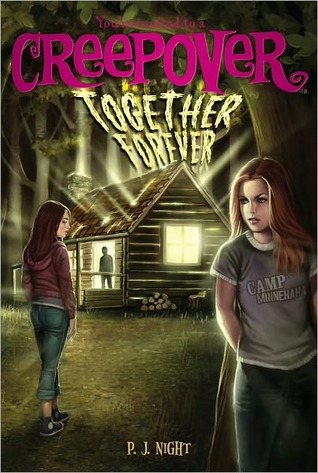 This was a great book, I love reading about camps and summers and of course scary dreams that come true.

We have 2 main characters, Sam and Ali. Twins. However they are very different. Sam is really sweet, nice and tries to do everything right (overkill) and Ali is more grumpy and doesn’t see the need to do everything perfect.

I can say, though Ali had a temper, I liked her more than her sister. Her sister was annoying with her overkill goody two-shoes act and with her idiocy. For someone who is so smart, I had expected her to stay away from that boy, especially when she found out certain details.
Ali on the other was great. I also knew there was a nicer girl underneath, a girl that was just buried down below.

I didn’t like how they switched POVs in the middle of the chapters though. One moment it is Ali, the next bang it is Sam. It was quite confusing and took a bit to find out whose mind we were in now.

The ending however, sucked. I am still confused as to how it went. I tried rereading it, but sorry, I still can’t figure it out. Maybe because the blurb is telling us that Ali is jealous of her sisters boyfriend, however, the problem with that theory is that we don’t see that jealousy. The only jealousy we see is that Ali is jealous about her sisters friends, her goody-two-shoes act and how everyone is swooning over her. Not once have I seen her jealous.
And also, if that ending is any indicator, that means that .. wasn’t who was said she was in the chapter were everything happened. And then I am wondering… was she ever? Or was it all turned around? So yeah, due to confusion I am -1 starring this book. Nice to go for a shock ending, but make sure it is believable/not confusing.