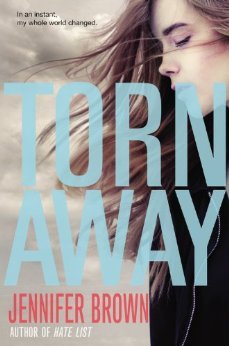 This book consists of 3 parts (which at times was a bit annoying to read).

You have the tornado part, where everything is destroyed that our main girl has (this was the best part), then she is shipped off to her father (this was the most horrendous part) and then the last part is where she finds a home with her grandparents (semi-good part).

I loved the intro to the book, the tornado part. It was so sad and heartbreaking. I never experienced a tornado and only saw on tv what happens, but with this book I felt like I was in the middle of it all. I could just imagine the tornado, could just imagine her fear. So really plus points for that writing. I think the best part was the tornado part, after that it quickly diverted to something I didn’t really like.

Now characters.
At the beginning I loved Jersey, I felt with her when she lost everything, I felt with her when she was shipped off to her dad. And there my sympathy ends. She was a total mess, horrendously done, and sorry girl but I can imagine your friend Dani acting like she was acting. The only time you called your friend was to whine, bitch and beg your way out of your father’s place. You didn’t care about her, you didn’t once just call for shit and giggles. No you constantly whined and was surprised that she didn’t react as you expected.
I know she was grieving, and I know her life sucks, but you need to keep your friends, not scare them away.
I disliked her at her grandparents place. She was so full with her mom’s stories about these people. These bad bad people, who were actually trying their hardest and best to help you. To feed you, to love you, and you acted like a total bitch for a lot of times. Only near the end did you finally open up and saw what was real. It was a cringe-worthy part for most of the time and I was happy when I reached the ending and she finally opened up her darn eyes.

Now Ronnie and Jersey’s family. I disliked Ronnie from the get-go, knowing he was up to something, and I knew that it would come to a surprise to Jersey. I hate Ronnie, I know Jersey is not his actual daughter, but come on, you have been a family for her for 5 or 6 or even 7 years. You don’t dump her because she looks too much like her mom and you can’t handle it…

Jersey’s family, wow I didn’t think I could dislike someone (or should I say multiple someones) more than I did with Ronnie and at times Jersey. But yes, it was possible. Her family was absolutely horrendous, the only point of light was her aunt who actually tried to make things better, helped her out and took care of her a bit. Those sisters, I really disliked them, they had no respect whatsoever, and I think they deserved what they had coming. I didn’t like the grandparents or Jersey’s dad. They were rude, mean and totally urgh.

And then at the ending, suddenly we have some sort of romance? Which totally didn’t fit, though was to be predicted from the start.