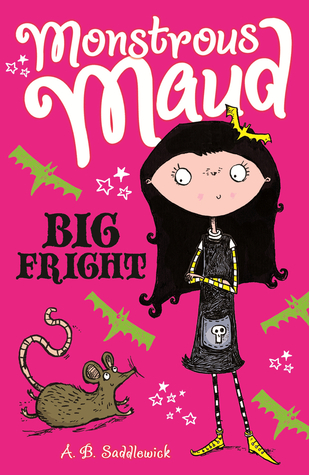 I saw book 5, and at that point didn’t know it was book 5 (and Goodreads didn’t mention this was a series, so that didn’t work either). Luckily I found out (due to things happening in book 5) quite early that it was a series (and of course I added a series thing on Goodreads to warn others as well).

This series is about Maud, or Monstrous Maud as she is called by her friends, who is transferred to a very special school. A school for monsters.

I really loved the idea of a monster school, and one so close to the normal schools. And this one is just super, there are special lessons, special pets, special sports and also teachers. I really liked that Maud had to hide her real identity (since monsters and humans don’t match), it gave the story something extra.
A lot of the school is described and while I wish there were pictures, I could just imagine myself the pictures and just imagine myself there. How I wish such a school would have existed back when I was little, I would have loved it.

Maud is a really fun character, and I love how she adapts so easily in the school. Frightening students, finding out about several secrets (won’t spoil anything). However, I get a bit tired about her and her rat, and how she and others treat that rat. At one point they even dressed up the poor thing and put it in a barbie car… Like what? Why? Seriously, that is just sad. I also think it is a bit peculiar that she drags the critter with her everywhere. Especially to such a scary place as a school (normal and monster).

Milly and also Penelope for that matter are the characters I don’t like, they are rude towards Maud and her friends. Milly a bit more than Penelope, but Penelope does other horrible things to people (especially Maud and her friends). I do hope they will change a bit, because it just gets annoying to have two antagonists.

Each book has its own story, and while you possibly could read them standalone, I wouldn’t recommend it. There are still some things that might be strange or awkward, so I would recommend starting at book 1.

All in all, a really fun series. Though again, I would have loved pictures, I think it would make the book come to life more.