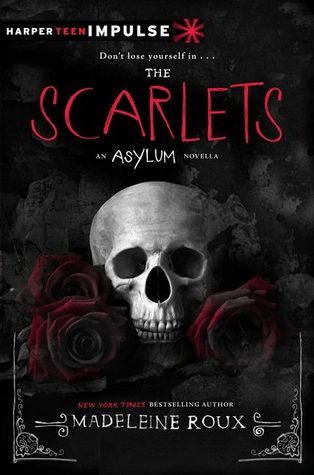 What I expected: Guy we know from the insert number of book going to college and getting invitation to some kind of group named Scarlets. What I got: Guy we know from the first book doing horrendous at school, drinking (and probably smoking), gets into problems and is bribed by his dad (who is named Roger), lots of things happen, though not much with the Scarlets, and then bang ending. Not much of a spoiler, so don’t worry. 🙂

Let’s just start with characters. My Gosh, I hated Cal and his dad, oh no wait, Roger. Cal was a prick, I didn’t like his attitude or his I need to drink-tude. I was pretty close to stopping with this novella because of him, oh and also because another character (coming after Cal). I don’t know how he gets to stay in that school, only reason I can think would be his dad, Roger, though we all know how he is, so there must be some magical unicorn prancing around taking care of Cal and his bad attitude/grades/drinking problem.

Now the next character and the one who will win the Prick-of-the-Century-award is Roger, or Cal’s dad. I found it highly annoying that he was called Roger. At times I just forgot that he was Cal’s dad and had to remind myself or go back a bit to find it out. He is the absolute king of pricks, mean guys, and douchebags. I can somewhat see where Cal gets his douchebaggery from. In the beginning I already didn’t like him and how he was extremely rude about Cal’s sexuality (in other words, Cal is gay and daddy doesn’t seem to like that), but nearing the end?
And when the ending came by I was just cheering (though also cringing) because of something that happened. I would say more, but I don’t want to spoil too much.

My favourite characters -and I wish we seen more of those 2- were Fallon and Holliday. I loved those 2 girls, they were awesome, kick-ass and they really deserved more time in the story. I would love to have a novella about the two of them and their research.

Now the story, I was highly disappointed in this part. Like I said in the first part, I expected scary situations with some group named Scarlets, and I didn’t get that. We could better dub the book: Cal’s College Life. There were things that were strange and unexplainable (like what is up with the sudden ghost? Why could Cal see him?) or just why? (Like adding some romance with Devon, then at the last moment dropping that off.) All in all the story was all over the place and again no SCARLETS. No, those conveniently pop up at the ending.

Ah, then we come to my favourite part to rant about: The Ending. It was horrendous, terrible, bad, urgh, and just no. If I had known that it would have this ending, I wouldn’t have read the book. I hate endings like that, bang action, and bang suddenly it is over… Wait what? Disappointed, very disappointed, I feel like we could easily have a few more pages with some sort of conclusion, anything better than the crappy one we got.

I am still curious about the Scarlets and what they do. I do hope we get more answers soon.

Would I recommend this novella? No. Just no. Just skip this one and go on and wait for book 2 to come out.