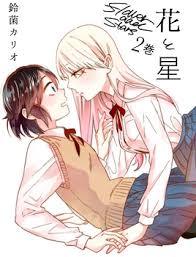 Review for the complete series.

This manga was mostly hit and miss. The first manga is rated a 2.5 stars, while the second is much better and receives a 4 star rating.

This is mostly because of the characters. Hanai-san is frustrating and annoying. Hoshino-san is just meh and too stalkerish. I couldn’t see the two of them get together. They just don’t match.
I also didn’t get Hoshino-san, she at times acted like a foreigner (making word puns and some other things), though from what we can see, she was already in Japan since her childhood. So yes, that bothered me.

Then we also have the rival. I didn’t like her, not in the first, not in the second manga. Her mood-changes were just annoying. One moment she would be jealous and pissed, the next happy, and then she would force herself on Hoshino-san. I just disliked her and felt like she could have easily been left out.

In the second manga volume we get a new rival, a guy. I really disliked him, he was totally clueless, anyone can see that Hanai-san doesn’t like him, doesn’t want him. She only has eyes for Hoshino-san. However, he kept coming, kept pushing, kept being annoying.

The ending was just lovely, however I felt the date was spoiled by Hoshino’s silliness. I was so looking forward to the date and then that all happened.

All in all, would I recommend this series? Mm, I am not sure. It is a decent series, but there are many moments that frustrated me. I would say, if you like Shoujo-ai try it out at least.