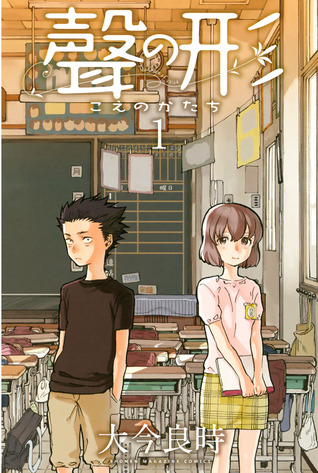 I am not sure what to think about this manga. I am also not sure if I found it good or not. For now it is a 4 star, but it might change.

The characters. Urgh I hated them all. Ishida is the worst of all. Being such a bully, such a mean person to someone who is deaf. Someone who is just trying her best to fit in, doing her best to make friends.
Ishida is an idiot, and I am sorry to say, but he kind of deserved what he got for bullying. However, I don’t approve it all the way. Especially after a while, I was like: Guys we know, he was a dickhead, but it wasn’t like he was alone in doing things. I do hope Ishida will learn a lesson and will get a bit smarter and doesn’t feel the need to be such a tough guy.

Everyone in the class were such hypocrites. Blaming it all on Ishida, while they themselves were bullies too. And them bullying Ishida even though they all participated.

I disliked the classmates, and also the teacher. Dear Lord, that dude should never have become a teacher. He barely did anything to help Nishimiya, and when things turned out bad for the school he switched over to Ishida and doing nothing to help him. Because Ishida had it coming. What kind of sad teacher are you? You should be there for your students, help then, correct them. Not just stand by and do nothing.

Though I have seen this happen in other manga (and even anime) as well. One person bullies another, then gets all that bullying back at them, by the same people who helped bully the others.
And just like in most cases, teachers stand by and do absolutely nothing.

Nishimiya is my favourite character, she is a wonderful girl, trying hard to live through her life without hearing anything. Trying her best to participate in things, trying hard to speak. Even when she was bullied, she tried to make friends with Ishida, and when Ishida was bullied she tried to help him. Even though he was totally oblivious to the fact. I also felt sorry for her, having such a mother who just forces her wishes and will on her child.

The artstyle bothered me as well. I didn’t really like it and at times found it very ugly.

All in all, it was an interesting manga, though I am not sure if I feel comfortable reading it further.