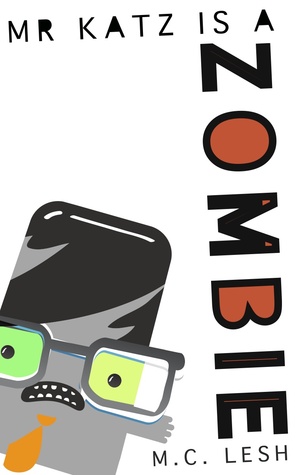 I am still not sure if I like this book or not. It had its good moments, but it also had enough bad moments.

First let me talk about the good things:
1. The zombie, I love zombies and this one featured a new kind of zombie, one by incantation instead of by bite or by disease or by some kind of voodoo thing.
2. The parent’s ghost hunting (and also other things hunting) agency. I really loved that and I would love a book featuring only them. Maybe something like a how they started book? Without the kid?
3. The wife of the ghost. She was great and really one of the few characters I liked. Normally people would be shocked/startled/etc. when someone has a gift to see ghosts, but she didn’t mind and she keeps it a secret.

Now the bad things:
1. The zombie, yes, even though I was happy to see a zombie there, I expected more action, more brain-munching-zombies, sadly we didn’t get that at all. Instead we have a zombie that is calm, eats baked goods (why????) and can be subdued by putting pillows over it. Destroying the total image of a zombie. 🙁
2. The characters. For most I just wanted to hit the characters on the head. The main character, while at times nice, just annoyed me because of his stupid actions. The twins and Rodney? Urgh.
3. That ending, or actually the answer to how to fix that zombie. It was a bit anti-climatic and I had anticipated something bigger, not something that easy.
4. The parents, any parent would get pissed if they found out their kid is doing stupid things. They? They just go along with it and help him. No word of punishments or whatsoever. A shame.
5. I found it a bit too chaotic. We got magic, ghosts, zombies, school, magic spells, friendship and some other things.
6. Mr. Katz has a fiancée, yet we never hear anything about her. Do they not live together? Do they not meet up in the weekend? Doesn’t she care that he was just gone for 3 days?

Would I recommend this book? Not really. I might check out the next book to see if it is better, but that is all.