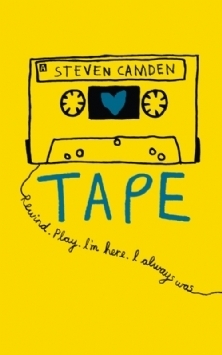 Once again a book that grabbed me from the beginning and that didn’t disappoint (well not a lot).

We have 2 main characters Ryan and Ameliah, 2 kids in different times, but somehow connected. However, I must say the connection was quite clear from when a certain name was dropped during the time Ameliah was listening to the tape. Add to that various other hints and voila. But, I didn’t mind that it was all predictable, if anything I just liked gathering more hints to prove my theory and also to see how this connection would be shown, how this would be told. And that part didn’t disappoint me. It was well done in that aspect.

I liked the little time references (like Ameliah having a cellphone, which Ryan didn’t have at that time) that showed which age they both lived in. Some things I recognized as being from that age and made me laugh or just nod along. 🙂

Ameliah, Ryan and various other characters. I really liked them and I enjoyed reading about their lives. Both Ryan and Ameliah went through a lot, losing people they love, starting with puberty and everything that brings, friendship and a few other things.
Though I have one complaint about Ameliah, I wish she could just be honest with Heather. Say no to her, find another friend, one who doesn’t want you to be girly girly and shop.

However, there was one BIG thing that I didn’t like and also the main reason why I rated this book a 4.5 instead of a perfect 5. And that was the whole Tape thing. I felt it was just weird, we have one time they have like 2 sentences before the connection disappears. After that nothing, at least until the end, goes on with the tape and why they could chat for that brief moment. It is a real shame, I was kind of looking forward to it. The only other time they get connected is near the end, and sorry by then I was already done with the concept. I really wish it was better done, maybe more conversations? Maybe some explanation other than that 2 kids in two different times pressed play/record at the same time? Which if you type it out like that sounds so unbelievable it is just scary.
And sure there is enough Tape conversations and Tape being used to say, yes this book deserves being called Tape, but come on, don’t do one conversation and then nothing till the end.

But all in all, it was a terrific book and I really enjoyed it. I do hope this author will write more books like this. And I would recommend this book to everyone!