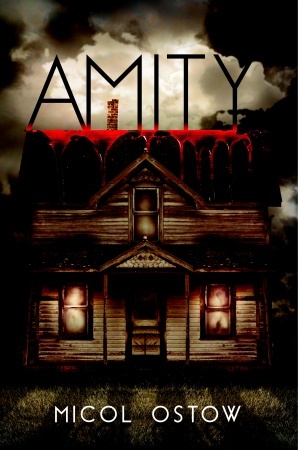 I was really, really looking forward to this book.

I always have had a fascination for the Amity house and the stories that surround it. Sadly this book was not meant to be.

The house and the details about the murder that took place in the real Amity were all great and I really had goosebumps, reading about the horrors that had happened there, the corruption the house did to its inhabitants, the way it seemed to have a life on its own. A life that meant no intruders.
There was great details on various things from the house. The spooky basement, the creepy attic, the things that went bump in the night (I am so going to check under my bed tonight, yes, yes I am). I was absolutely scared at some parts.

Then we get to the part I didn’t like: the characters.
At first they were ok, and I was interested to find out more about them, about their families. However, this soon changed, when they got corrupted (if they got that, or if they were already on the border of breaking into something evil, I guess with Connor that he was already evil, given the reports we saw). I was disgusted, especially at Connor. How he treated humans, how he treated animals, how he treated everything around him. He was like worse version of his dad (and yes his dad was also just horrendous, so you can imagine how bad Connor was). There were various parts that I just skipped or read with wide eyes. Some scenes just disgusted me, making me wish I hadn’t read it, wish I could just erase it from memory. Sadly with my mind, I will probably need a lot of fluffy or other less-disturbing books to erase it slightly from my mind. 🙁
I think I would rather have had Jules as the main protagonist for the first POV, not Connor.
Gwen, I am not even sure what to think of her. She was weird, she was so fragile at times, yet at other times strangely strong. I am still, after all that I read, not sure what to think of her behaviour.
Luke, not really the main character but also a person who turned out to be highly disturbed and I was really disgusted at what he did.

Another thing I didn’t like was how the chapters were done. Some chapters were only one sentence, some a paragraph, others a few pages. It was a bit confusing and annoying.

Then we have the constant stuff between (), which at times just distracted me from reading because I had to go back and read the sentence that came before the () again.

The book is split up in 5 parts and we switch between 10 years before and the now. 2 different characters, a boy and a girl.

The last part was absolutely confusing and I had no clue who was talking at times, very annoying since that was the climatic scene and I was looking forward to it. 🙁

The letter from Connor? Gave me goosebumps all over.

Oh and I should mention that I really liked the cover, it really gives me the creeps, with the blood flowing from the roof, the windows like eyes, and is that a girl in the middle window? *shivers*

All in all a book that was a bit conflicting. It had good things, but also quite a few flaws/bad things. So I will give it 2.5 stars.