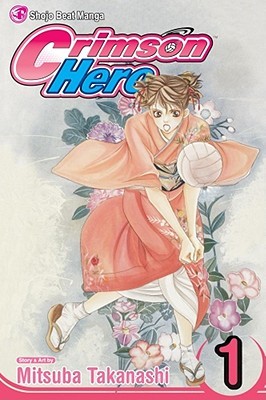 As people could have seen, I am kind of thinking of dropping this series at 14.

The reasons why are also discussed in this review, since this is a problem that keeps on going on and on in the first 10 volumes as well.

This is a review for the first 10ish volumes. So it might contain spoilers and such.

First of all, I was interested in this manga. I read parts of it in the Shoujo Beat manga (back when that still existed) and wanted to read the whole manga. I am normally not one to like sports manga or anime, but this one seemed to have other elements as well (slice of life, romance, drama, school, friendship).

Sadly the drama is a really big thing in here. Nobara is not really helping with things. She has 2 guys who like her and are kind of both trying to win her over. What does Nobara do? Well, actually she just treats them both the same, which makes them confused and also makes them think that either of them has a chance. Especially Keisuke is a victim of this. Though again, he is also an idiot himself (I will talk more about the characters in a bit).
The manga is mostly about Nobara’s relations with the guys (she is dorm-mother), her endless “I can win this” mentality (which bores after a while) and the drama circling her that is her mother and her family.
As you can see it is mostly about those 3 things, and yes that bores. Yes, I want to see something different.

Now characters:
Nobara: At times I really liked her, but at other times I just wanted to shake her around and get some sense in her. You can’t be super nice to 2 guys, that just doesn’t work, especially when they both have a big interest in you.
And her whole: We can win this mentality is nice and all, but gets annoying, because she will do whatever she can to win. Which also means just disappearing to a beach and be trained by someone there. And in all that times (a month) she never once contacted her friends, nor did she tell them she was coming back. Like seriously? Do you even see them as friends?
Her family drama was also getting a bit *rolls eyes* at around volume 3.
Also her being dorm-mother? Like what the hell? That is not something a 15 year old girl should do. And a 15 year old girl should not be left alone with guys.
Yuushin: I really liked him, though I didn’t like how he was so easy to let no one know about his relationship with Nobara. I mean, come on, did you really think no one would mind? That we wouldn’t get 100% drama about it? Urgh.
Keisuke: I still dislike his guts. Sure, Nobara isn’t the best girl to show a guy she isn’t interested, but come on, multiple times she pushed you away, told you, you are nothing but a friend. And yet you pushed on and on. Even went all drama girl when it came out that Yuushin and Nobara had a relationship. What? You could have seen this coming.
All the other characters were hit and miss. I didn’t always like Kanako, and I often wish she was left out of the manga, because of her terrible attitude.

There were still things I loved. Like them finally winning stuff (because, come on, losing all the time gets kind of boring), the confessions, the family situation and it getting solved.

All in all, I am not sure if I will continue with the manga. It is really rinse and repeat and the drama only seems to get more and more intense. And as you can see on my recent ratings, this manga went from 5/4 stars to 2 and lower.